OTHER DEPARTMENTAL SCHEMES IN THREE YEARS

HISTORY AND GROWTH OF THE DEPARTMENT:

Soil Erosion is a major problem facing the state, which is more dominant in the areas where shifting cultivation is practiced. In the tribal areas or the sixth schedule districts of the state wherein the primitive form of agriculture or shifting cultivation is practiced, the need to study the growing problem has been long felt. In the year 1953, at the request of the State Government and a section of tribal leaders, a preliminary study was undertaken by the Inspector General of Forests, Govt. of India and the Agricultural Commissioner, Govt. of India. Based on the recommendation of the experts, a pilot project to tackle the problem of diminishing soil fertility of the shifting agricultural lands was undertaken in the Garo Hills in the year 1954.The experts pointed that the problem of soil erosion was not so significant in these areas as was that of diminishing soil fertility. Further, it was pointed that integrated land use could solve the problem of diminishing soil fertility.

The integrated land use recommended was that the top and upper slopes should be afforested to reduce soil wash and preserve streams flow, the middle slopes should be used for horticultural purposes and the slopes and valley bottoms be shaped for permanent staple food cropping. It was suggested that simultaneously efforts for restoration of the jhummed fields be initiated by raising leguminous crops viz; wattle (Acacia Mollesima var durrans) in the freshly abandoned jhummed land. Acacia Mollesima var durrans has a maturity period of 8-9 years but could be harvested earlier also. The crop being leguminous, it helps in increasing the soil nitrogen content as also retention of soil moisture. The idea was that when the land was to be jhummed as per the cycling jhumming, these wattle trees could be cut down, the bark could be used for tanning and the stems burnt to get wood ash. But the experimental wattle cultivation in the three centres in the Garo Hills revealed that the crop could not be grown at these low elevations. Therefore this part of the recommendations was not fruitful and had to be abandoned.

In another part of the recommendation concerning horticultural crops, it was decided to take up cultivation of cashew nut, black pepper, Para rubber, coffee etc. at three centres in the Garo Hills on a pilot basis. As the tribal areas are poorly connected and marketing of perishable horticultural crops such as pine apples, banana etc. would be difficult, on perishable cash crops were selected.

By the year 1959, the work had expanded sufficiently and it was decided to constitute a separate Department to conduct soil conservation works. The Chief Conservator of Forests was also designated as the Director of Soil Conservation. In 1960 Soil Conservation work was extended to areas outside the Sixth Schedule Districts and a Lower Assam Soil Conservation Division was constituted. Further encouraged by the prospects of cultivation of certain non perishable crops, a loan-cum-subsidy scheme was initiated for cashew nut, coffee and black pepper. As per the scheme, half the estimate cost of creating small scale plantations of the tribals was granted as subsidy and the other half was treated as loans recoverable in easy installments when the plantations begin yielding harvests. The cashew nut was to be grown primarily in freshly abandoned jhum lands so that these orchards would provide permanent soil cover and at the same time yield incomes. While owing to lack of technical personal at lower levels, much progress initially could not be made in the creation of terraces where food crops could be grown by the tribesmen on such permanent yields, yet under the supervision of trained Divisional Soil Conservation Officers gradually their Programme was also taken up where the slopes were moderate and gravity irrigation facilities were available by construction of dams and irrigation channels. Some experiment work was also done using high dams and light irrigation pumps to provide water for paddy growing on terraces.

Afforestation work in eroded land made available by District Councils was first taken up in the United Khasi and Jaintia Hills in 1958-59 in two Centres and then extended significantly in the Mizo districts and still taken in the United Mikir/ North Cachar Hills.

OBJECTIVES OF THE DEPARTMENT

ACTIVITIES OF THE DEPARTMENT

(a) Brief Description of the Schemes indicating main objectives of the Department:

(i) Earthen Bund : These bunds are made across the field to conserve water at the comparatively higher land.

(ii) Shelter Platform: This intervention is new for the department. This is required not only for shelter of human and animal husbandry but also to for storage of the harvested crops during flood season. 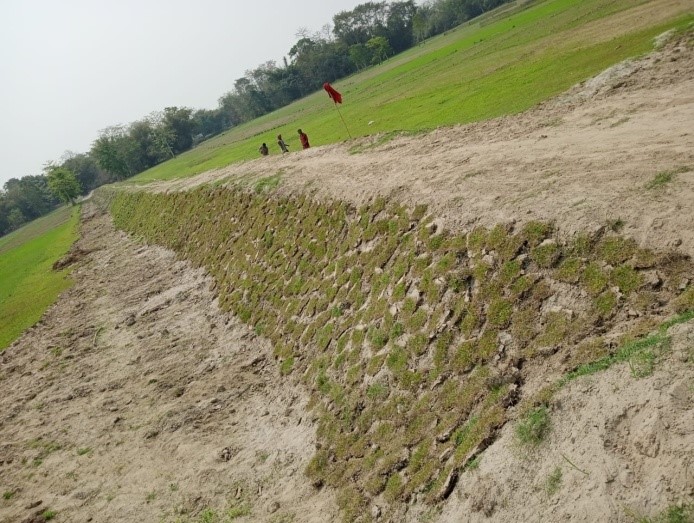 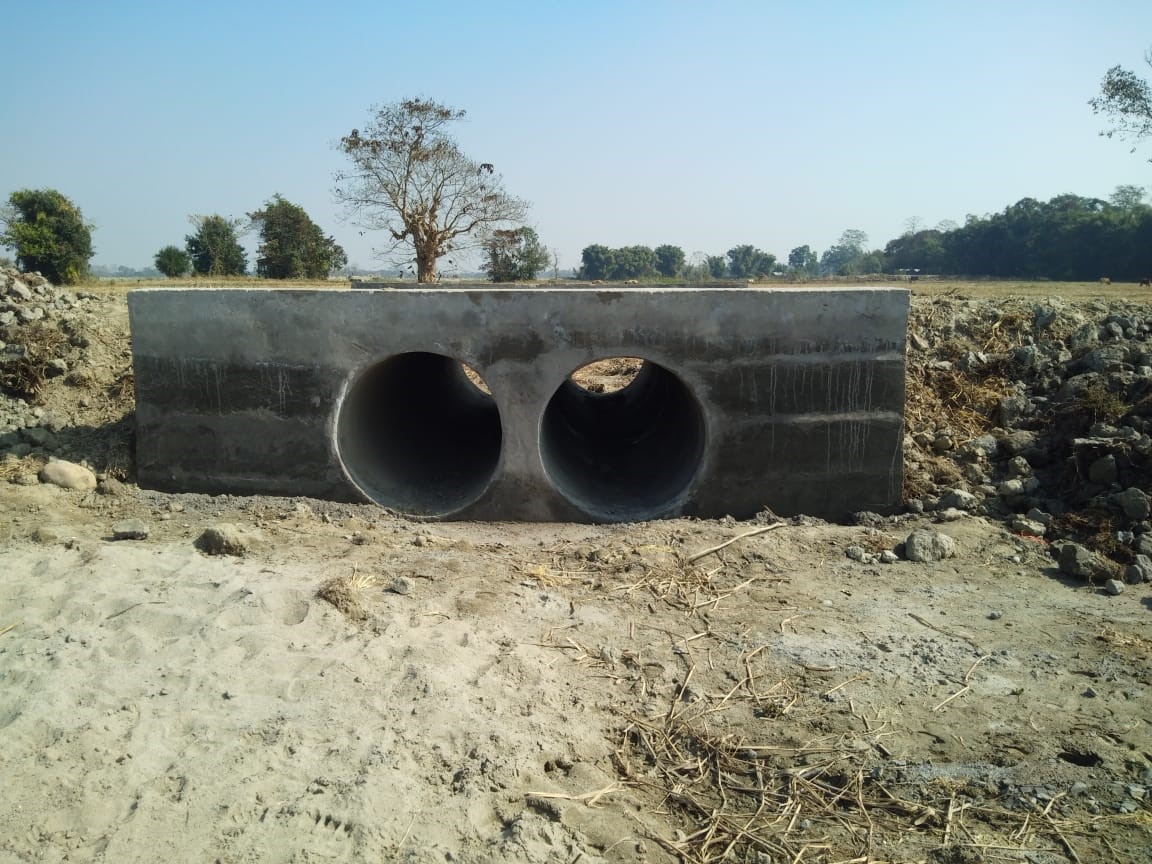 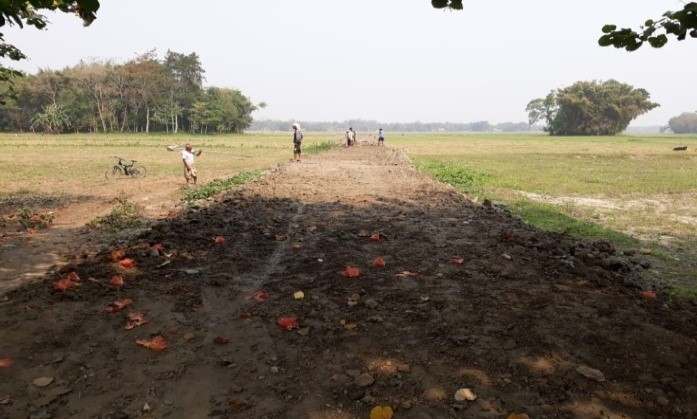 Land Reclamation and Water Distribution: Uncultivable waterlogged area can be reclaimed by constructing drainage channel, culvert and disposing the stagnant water through these channels to adjacent river /streams. Land reclamation is also done by cutting and leveling of tillah lands and eradication and removal of weeds like Ipomoea, water hyacinth manually or by using herbicides. 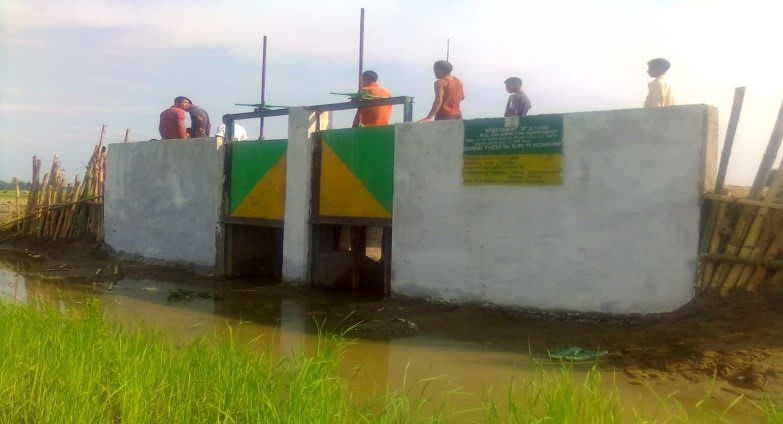 Gully Control Works (With or without Sluice Gate): Gully erosion is the main erosion problem of the state which eats up about 3000 hectares of agricultural land annually. But in Majuli gully erosion is not very prominent. Gullies are formed due to the uncontrolled run off of rain water. It can be protected by constructing Drop Spill Way. 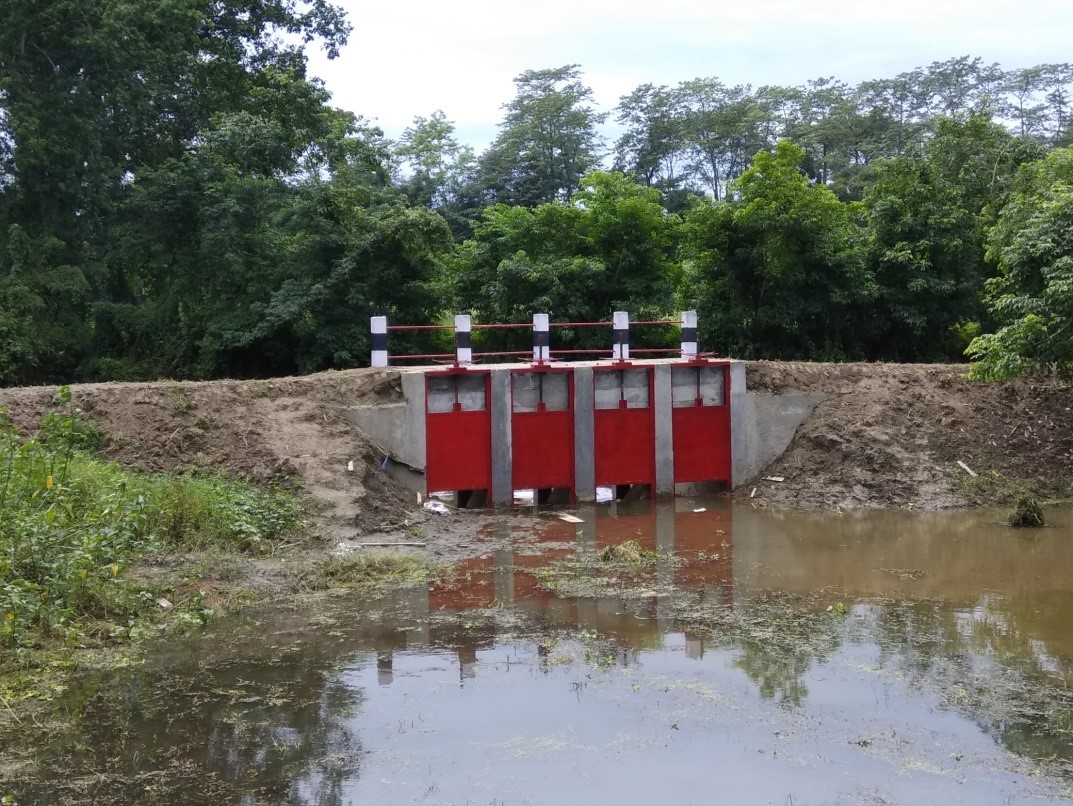 River Training Project: The rivers/streams in Assam are meandering in nature and have caused severe river bank erosion problems in areas adjacent to banks of most of the rivers and tributaries. Due to heavy sedimentation in riverbeds, the problem is getting worse every year. In Majuli two types of river training works are executed or proposed to execute. 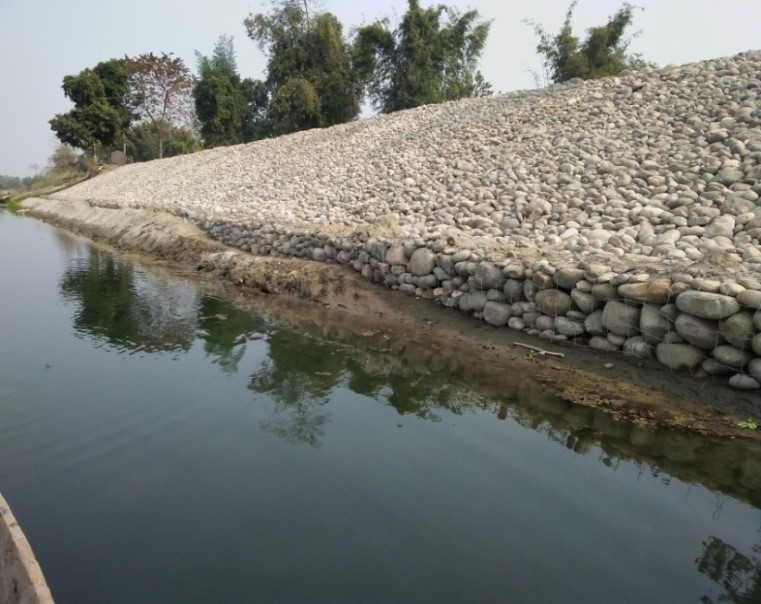 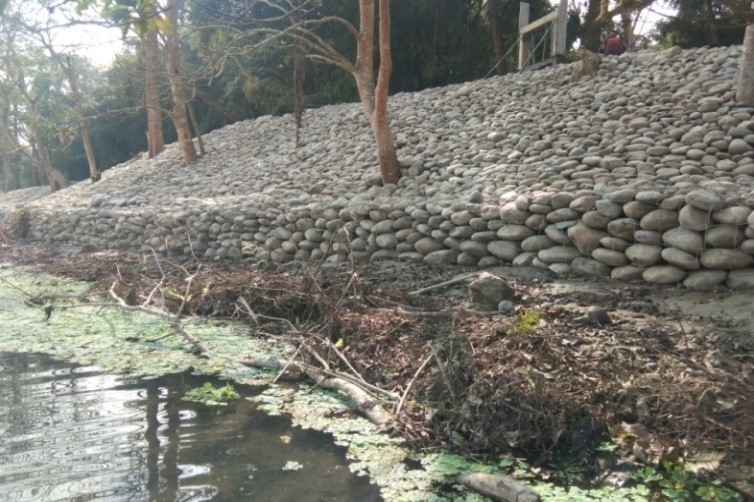 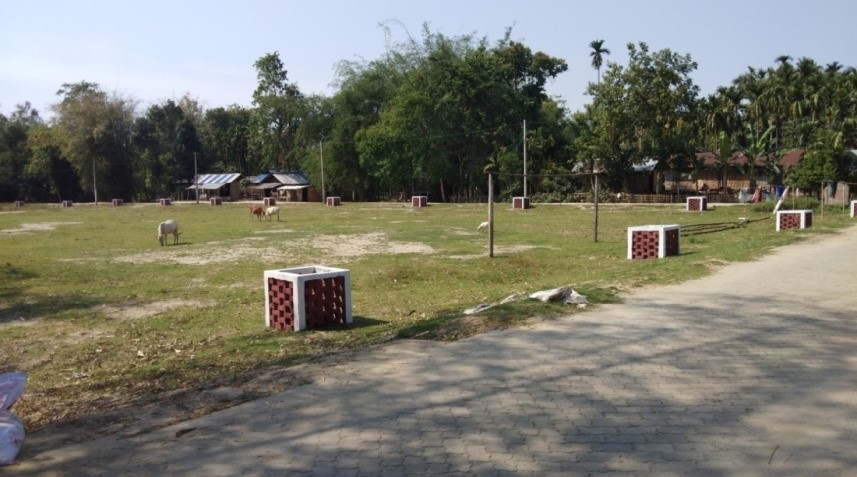 Protective Afforestation: All the riverine non agricultural land, degraded wasteland not suitable for raising agricultural crops are brought under plantation to provide permanent cover to the top soil as well as to maintain the ecological balance 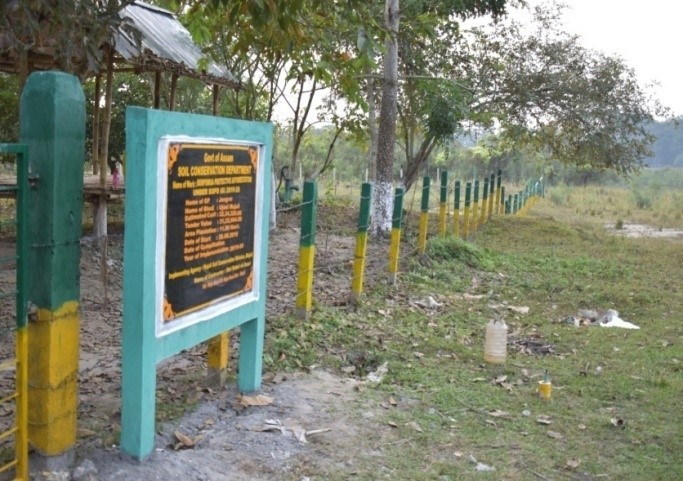