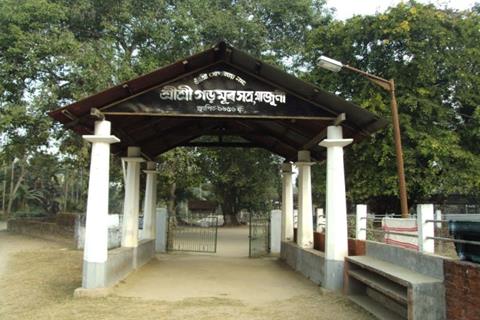 Garamur Satra is one of the four major royal Satras of the Majuli Island. The name of the Satra has been derived from two words -Garh and mur - compounded in to one. In Assamese language Garh ,means embankment and Mur means head. The compound word therefore,means the end point of an embankment(Garh).Records say that the Satra was eastablished at a place which was located on the extreme (northern) end of an embankment called Chowatalar Garh built by the Ahom King Pratap Singha (1603-1641). The remains of that Garh approaching the Satra in the southeastern direction could be seen till recent decades.

As a Satra established and partonized by the medieval Kings of Assam, Garamur was also one of the most affluent Satras of Assam in the past with thousand of revenue free lands and other movable properties granted by the Kings. It is recorded that King Siva Singha (1 71 4-1 744) himself donated 30,000 puras (ipura = 2.66acres) of revenue free land to the Satra at one time. The Satradhikar of this Satra was also allowed to put on certain insignia reflecting on his dignity and status and to assume all attributes resembling the establishment of a royal palace. And for that reason, the Satra was popularly called Rajaghariya satra. As matter of fact almost all Satradhikars of this Satra till the time of the great Pitambardeva Goswami exercised power in the style of a king and behaved in all possible ways like that of the royalty. The Satra was till the first quarter of the 20th century a monastic Satra with both the pontiff and its residential devotees leading a monastic life. Considering significant aspects for the welfare of the Satra, The then Satradhikar late Pitambardeva Goswami (1908-1962) abolished the system in the year 1915 and allowed the inmates to marry. Since then, baring the Satradhikar and his deputy (The deka Adhikar), and sometimes one or two inmates, it became a Satra of householding inmates. Thus the Satra is at present a semi monastic Satra. The Satra, however, has attached to it a branch where all inmates are householders including the pontiff. The Satradhikar was recruited from the family of this pontiff. The custom has been now abolished as the family dessending from Vamshigopaldeva has ceased to exist Garamur Satra has a very clean and quiet atmosphere from inception resembling a solitary hermitage distinguished by long and large Bakul trees planted centuries back all around the residence of the pontiff and the common prayer hall. The buildings of the Satra are approached by a good and long road. The namghar is a huge structure with the roof supported by similarly huge wooden pillars. The whole place is dominated by the note of decency and propriety which is so marked a characteristic of Vaishnavism of Majuli.

Here everything is fresh, neat and well to do. Once the well - groomed smiling monks were "at peace with themselves and with the world at large at even little boys that flock around them are unusually clean and well behaved."This scenario of the approaching road, the residence of the pontiff and the great prayer hall located in a solitary and quiet atmosphere still remind the scenario of the Satra hundred years back.

SATTRADHIKARS
Thirteen Satradhikars so far had occupied the religious seat (Gaddy) till Haridev Goswami, the present occupant of the seat. They are Lakshminarayandev, Jayramdev, Baloramdev, Haridev, Krishnadev, Basudev, Raghudev, Haridev, Bhadrakrishnadev, Jogachandradev, Pitambardev (1908- 1963), Krishnachandradev (1962-1986), and Haridev (1987-). The history of the Satra witnessed significant development during the tenure of Pitambardev Goswami who converted the monastic institution into semi monastic one by allowing the celibate inmates to marry and become householder. That permission or order was effective from 1915. Now Garamur Satra is a householder inmates, although the pontiff is customarily celibate.

SRI SRI PITAMBARDEV GOSWAMI
The history of Garamur Satra in modern time consists, in a large part, of the life and works of its great Satradhikar Pitambardev Goswami, who was a great social reformer, a religious leader and a distinguished freedom fighter. A friend of Gandhiji, Nehru and Vinoba, he had a strong personality and vision of life. He fought against caste, inequality, untouchability and against gender- biasness.

FESTIVALS
Garamur Satra is a famous for its various culture activities of which the Ras Lila Festival is the most well known. It is performed as a stage theatre in the great hall of the Satra called Garamur Vamshigopal Natya Mondir. Contrary to the rules followed by any other Satra, here in Garmur, both men and women take part in the festival. The famous cine-artist late Ila Kakoti was a product of this Satra. Other regular and irregular cultural functions performed in the Satra are Bihu, the Janmastami of Lord Krishna, tithi of the late Satradhika, Phalgutsav and other. On all occasions the inmates perform drama(natak), dance (nritya)and music (sangit)that constitute Assamese Satriaya classical culture.

HISTORICAL ITEMS
The satra lost most of its heritage possessions during the internal commotions of the 18th century, the Burmese invasions of the early 20th century, and during the freedom struggle when they were either lost due to the absence of the Satradhikar when he was in jail or due to their confiscation by the British Government. Among the existing valuable possessions a large brass tray (rupar sarai) gifted by the great premir Atan Buragohain Dangariya is noteworthy. Other Classical and archaelogical valuable assets are Ivory, Silver made embrodered utensils, Canon used during Ahom rulers, wheels for elephant cart made in London, ancient literary manuscripts (Sanchipat), Idols, sculptures made of Umber with classical art etc. and a heritage building hundred years old.